Sorry guys, still haven't had a whole lot of time for knitting etc, but I do have an update! I started on the monkey for February. I'm making it black since I don't have any brown yarn I'm willing to use on this project.... Anyways, here's the monkey: 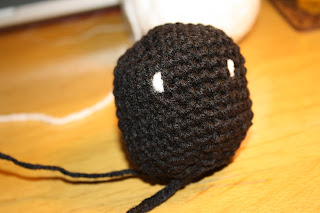 It looks a little freaky right now, especially without the ears, and I'm not totally convinced it's ever going to stop being freaky. The white eyes are just a little much, but black eyes wouldn't have shown up, so what else was I to do?

I've also been working on that cape, which is nearly 13 inches! I have to keep doing this same stitch for 18 inches, so almost there! 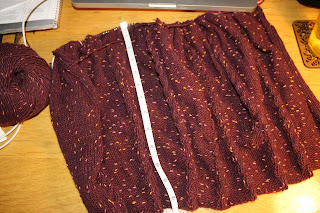 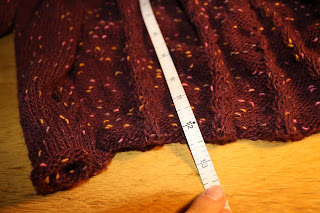 The throw I've been working has come to a halt... I need to buy the next color before I can do anything else on it, and since I've been focusing on the cape, I haven't been thinking about that.
Posted by Jessica at 8:35 PM

Jessica
I'm a college student, and I am very interested in instilling creativity and action in everyone! There are too many ways to waste time these days, and drawing a picture is a very good way to spend time in my opinion.